Senate Republicans Monday morning unveiled their $618 billion counterproposal to President Joe Biden’s $1.9 trillion Covid-19 relief plan, ahead of a meeting between 10 GOP senators and Biden about whether they can work together.

The proposal would provide $160 billion for testing, vaccines and personal protective equipment, extend the $300 weekly unemployment insurance payments until July and provide $1,000 checks to lower-income Americans, according to a draft framework.

Those checks would begin phasing out much earlier than Biden’s plan and would be capped at $100,000 for joint filers. Dependents and children would receive an additional $500 each. People in both parties have complained that the $1,400 checks from Biden should not go to higher-income families. 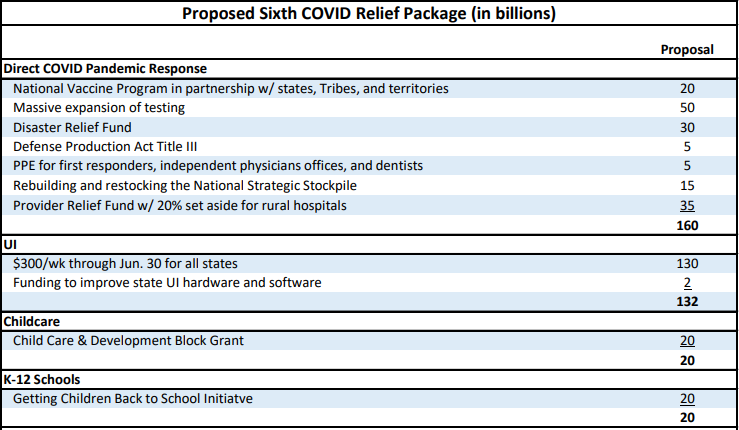 Sen. Susan Collins (R-Maine) and nine of her colleagues asked Biden for a meeting on the stimulus plan on Sunday as Democratic leaders prepared to pursue budget reconciliation this week, which would evade the Senate’s 60-vote requirement. Biden agreed to the meeting on Sunday night, and the senators will meet with the president at 5 p.m. on Monday afternoon.

In a statement, the senators said they "recognize your calls for unity and want to work in good faith with your Administration to meet the health, economic, and societal challenges of the COVID crisis." The group includes Collins and GOP Sens. Bill Cassidy of Louisiana, Thom Tillis of North Carolina, Mike Rounds of South Dakota, Mitt Romney of Utah, Shelley Moore Capito of West Virginia, Lisa Murkowski of Alaska, Rob Portman of Ohio, Todd Young of Indiana and Jerry Moran of Kansas.

Democrats, including Senate Majority Leader Chuck Schumer, have complained that Republicans are coming in nowhere near Biden’s starting point for negotiations. Moreover, the omission of state and local funding is likely a nonstarter for Democrats.

“The package outlined by 10 Senate Republicans is far too small to provide the relief the American people need. In particular, a three-month extension of jobless benefits is a non-starter," said Sen. Ron Wyden (D-Ore.), the incoming Finance chair. "An extension of benefits for at least six months is essential.”

"We cannot do the mistake of 2009 where they whittled down the program so that the amount of relief was so small that the recession lasted four or five years," Schumer told the New York Daily News on Sunday.

Republicans say Biden will start off his administration on the wrong foot if he doesn’t try to compromise with the GOP on coronavirus legislation. They complained over the past few days that pursuing budget reconciliation would undercut Biden’s pledge to be a bipartisan president.

Fauci on CPAC speech: 'I'm sure that you can get a standing ovation by saying I'm wrong'