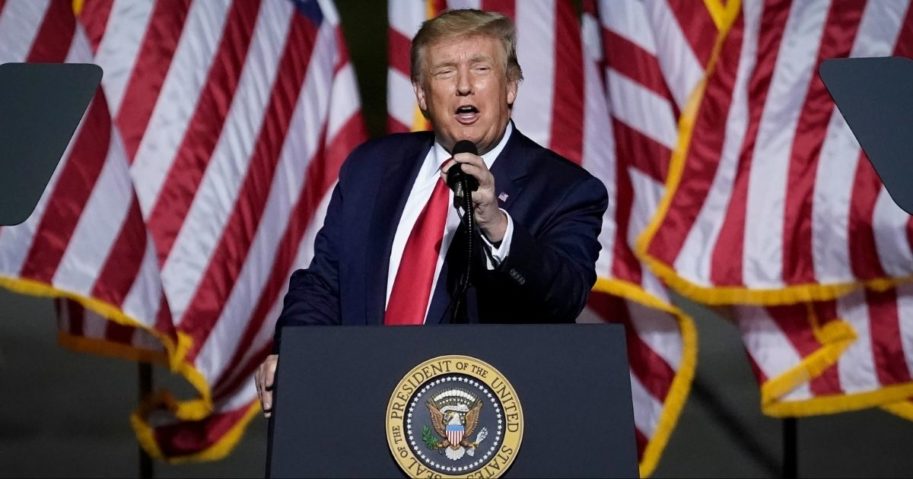 President Donald Trump is being nominated for a Nobel Peace Prize for bringing what his nominators said was “common sense” to global diplomacy through the “Trump Doctrine.”

Four Australian law professors wrote that the “Trump Doctrine” is Nobel-worthy, citing the recent peace agreement between the United Arab Emirates and Israel. The agreement was cited by two others who have nominated Trump for the coveted honor.

Trump followed the USA-Israel deal with one between Bahrain and Israel.

Australian law professor David Flint said Trump “went ahead and negotiated against all advice, but he did it with common sense,” according to Sky News.

“He negotiated directly with the Arab states concerned and Israel and brought them together,” Flint said.

TRENDING: Driver Who Allegedly Rammed Pro-Trump Crowd Prayed To Go Out a Martyr, Posts Link Her to ‘Caravan 4 Peace’ Group

Flint added that the “Trump Doctrine” is “something extraordinary” that has revolutionized America’s approach to global conflict.

“He has, firstly, common sense, and he is only guided by national interest … and therefore an interest in the Western alliance,” he said.

“What he has done with the Trump Doctrine is that he has decided he would no longer have America in endless wars, wars which achieve nothing but the killing of thousands of young Americans. So he’s reducing America’s tendency to get involved in any and every war,” he went on.

Trump has made a point of noting his work to reduce the number of Americans involved in wars:

I’ve done more in less than 4 years than Biden’s done in more than 40 years, including for Black America. Biden has been a part of every failed decision for decades. Bad Trade Deals, Endless Wars, you name it, he has shown a complete lack of leadership. He’s weak & shot!!!

Flint said the result is a 21st-century version of the domino theory, except with states falling in line one after another to embrace peace.

“The states are lining up, Arab and Middle-Eastern, to join that network of peace which will dominate the Middle-East,” he said.

RELATED: Trump Invokes Past Bipartisan Support of Amy Coney Barrett: ‘This Should Be a Straightforward and Prompt Confirmation’

Flint said Trump’s unique brand of diplomacy “is really producing peace in the world in a way in a which none of his predecessors did, and he fully deserves the Nobel Peace Prize.”

Wow say what you want, but the US President got his 3rd Nobel Peace prize nomination. “The TrumpDoctrine”
The USA is awesome.🇺🇸🇺🇸🇺🇸#Trump
I like when our presidents shine on the international stage like that.
Makes us look like spoiled kids not getting along in our own house.

The Trump Doctrine: @FredFleitz says @realDonaldTrump’s Nobel Peace Prize nominations are significant because he is being praised for putting America first and removing us from endless wars. #AmericaFirst #MAGA #Dobbs pic.twitter.com/PsNGLl2tRE

Trump nominated for a “THIRD Nobel Peace Prize” by Australian law professors for his so-called Trump Doctrine, his doctrine against endless wars. Recognizing his recent signing of the Abraham Accords, a peace agreement between, Israel, Bahrain, & the UAE helping stabilize the ME. pic.twitter.com/e1rXRWlonQ

Christian Tybring-Gjedde, a member of the Norwegian Parliament who earlier nominated Trump for the prize, said Trump has been a peacemaker on the world stage.

“Indeed, Trump has broken a 39-year-old streak of American Presidents either starting a war or bringing the United States into an international armed conflict,” he said.

If Trump is awarded the peace prize, he will be the fifth American president to win the coveted honor. President Theodore Roosevelt won the prize in 1906, President Woodrow Wilson in 1920 and President Jimmy Carter in 2002, long after he had left office.

Former President Barack Obama was awarded the peace prize in 2009, only nine months after entering office.