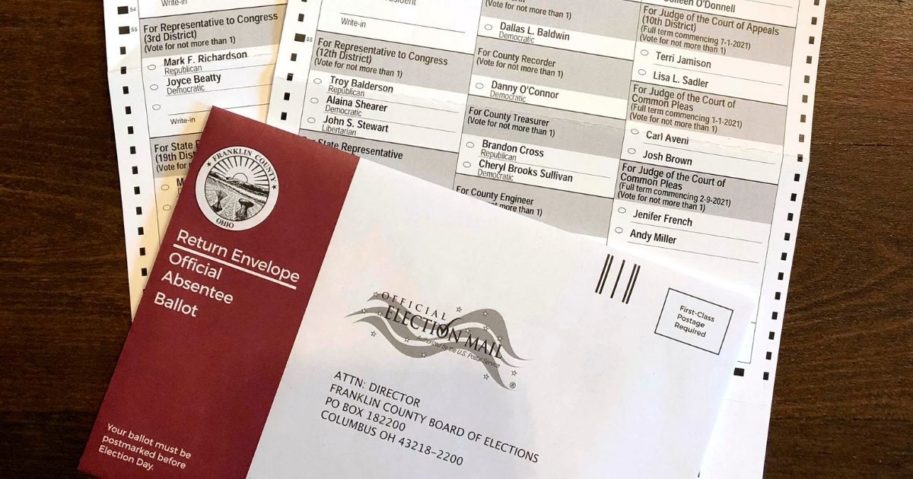 “The Board of Elections and vendor BlueCrest determined that 49,669 voters received an inaccurate ballot. Those ballots were part of 237,498 mailed through the United States Postal Service. The Board’s primary goal is to have all 49,669 impacted voters cast their correct ballot,” a news release issued Friday by the Franklin County Board of Elections read.

The problem was first noticed on Tuesday, when some voters realized that the addresses on the ballots were wrong, according to WOSU-FM.

In at least one case, two people at the same address received different ballots.

President Donald Trump described the incident as a “Rigged Election” on Twitter.

Franklin County officials said it was simply an accident, not a conspiracy.

Mr. President, it certainly was a serious mistake, but a serious mistake that we’re working hard to make right. Our board is bipartisan and our elections are fair. And every vote will be counted. https://t.co/RMvOPdeAbT

“It was determined that a high-speed scanner used to proof ballots for accuracy was not working properly,” Board of Elections spokesman Aaron Sellers said in a statement.

“On October 3 at 2:24 p.m., a function of one of those scanners was disabled,” election board director Ed Leonard said, according to NPR. “This was determined to be the root cause of the system error that led to voters receiving an incorrect ballot.”

On Wednesday, Ohio Secretary of State Frank LaRose ordered the Franklin County board to inform voters who received the initial ballots not to use them and to either wait for a correct absentee ballot, vote in person early at the election board headquarters or vote provisionally on Election Day in person, WCMH-TV reported.

Mass mail-in voting has experienced some hiccups along the way. In New York City, about 100,000 ballots had to be re-sent after a printer error mixed up addresses, according to the New York Post.

In Wisconsin last month, several trays of mail that included ballots were found dumped in a ditch.

Bags of mail found in a Virginia Beach dumpster. Still voting by mail? Not me. #virginia #mailfraud https://t.co/NgQRJyzPTg

Trump has said repeatedly that ballot fraud is a major problem because so many states are mass-mailing ballots to encourage voting by mail.

“There’s thousands of ballots right there, you pick up any paper in the country practically and they’re cheating all over the place with the ballots, so how is that not a problem? That’s a much bigger problem than China or Russia, if you look at it, it’s a much bigger problem,” Trump said Friday in an interview with Fox Business, The Hill reported.

Christian Serratos Is the Queen of Tejano Music in ‘Selena: The...