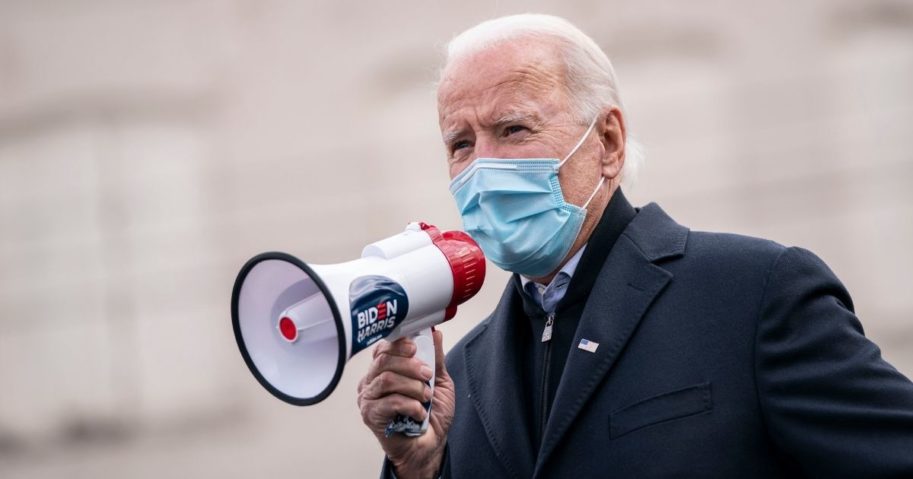 Democratic presidential nominee Joe Biden plans to take control of the narrative quickly if he is declared the winner of his contest with President Donald Trump, according to a new report.

Biden’s advisers believe that in the contested 2000 election, Democrat Al Gore was not aggressive enough in countering former President George W. Bush’s claims of victory, according to Axios.

The Biden campaign indicated it plans to tune out anything Trump says, jump at any announcement from a news organization that the Democratic nominee has won, and assume that whatever data it has is correct.

Biden “will address the nation on Election Night in Wilmington, Delaware,” his campaign has said.

Biden campaign manager Jen O’Malley Dillon said even if all the votes have not been counted Tuesday night, the campaign will likely have “a very good sense of where we’re headed.”

“We’re not really concerned about what Donald Trump says,” O’Malley Dillon said. “We’re going to use our data, our understanding of where this is headed, and make sure that the vice president is addressing the American people.”

Trump indicated there will be probably legal challenges to the voting, and Biden has also amassed a legal team to duke it out in court after the polls close.

“[A]s soon as that election is over, we’re going in with our lawyers,” Trump told reporters Sunday in North Carolina.

Meanwhile, according to Axios, if Biden believes he has won, he will start making transition announcements.

Do you think that Democratic nominee Joe Biden will be declared the winner on election night?

“That way, core aides won’t have to worry about their own jobs, but will immediately be able to get to work,” the outlet reported.

Biden also has a stack of executive orders waiting to undo Trump’s work, and has plans to put his people in place throughout the vast federal bureaucracy.

Axios reported that Biden will not embrace the full progressive playbook, and is unlikely to immediately call for adding justices to the Supreme Court or seek to eliminate the Senate’s filibuster rule.

The extent to which Biden can move quickly will also be determined by the various Senate races. Republicans currently hold a 53-47 Senate majority. Democrats control the House.

However, some advise that when the voting is over, the real battle is just beginning.

“In a close election, especially this close presidential election, whatever side is down is going to try everything they possibly can,” Benjamin Ginsberg, an elections lawyer, told Politico.

In key states where the vote is expected to be close, lawyers have been preparing their battle plans.

“Having been in a close election before, you have to have the lawyers lined up,” former Republican North Carolina Gov. Pat McCrory told Politico. “Everybody should prepare for everything. They have no choice but to do that.”

Johnny Rotten gets flea bites on groin after keeping squirrels in...

The Weeknd had the most bizarre costume at the AMAs