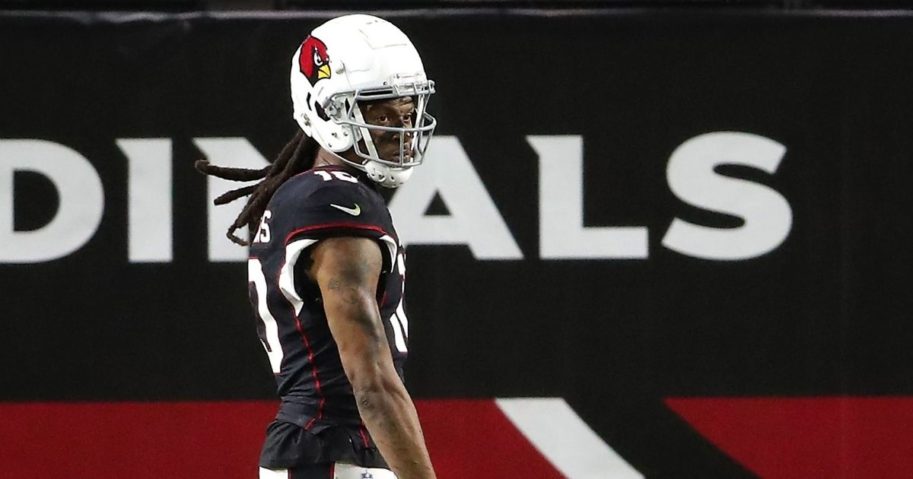 Don’t you just hate it when you’re trying to give a peace sign but only your middle finger will cooperate?

What’s that? That’s not a thing?

Well, someone should probably explain that to Arizona Cardinals superstar receiver DeAndre Hopkins so he can change his flimsy explanation as to why flipped off a caravan of Trump supporters.

Hopkins, the NFL leader in receiving yards going into Week 8, was caught on camera giving the double-bird salute to Trump supporters before the Cardinals’ Sunday night game against the Seattle Seahawks.

The photos quickly went viral, and you can check them out below:

@AZCardinals this is one of your own Deandre Hopkins flipping off people. Apparently weaving in and out of traffic during a Trump rally. Maybe he can set the example as a public figure and let people exercise their 1st amendment right. Great behavior from a Cardinal. pic.twitter.com/NgIzvmyrL2

Hopkins was featured on the Tuesday episode of the “All Things Covered” podcast and gave his side of the story. It was a curious explanation, to say the least.

Do you buy DeAndre Hopkins’ explanation at all?

“Driving down the highway I guess I got in between a train or a bunch of cars that I wasn’t supposed to be in between in my car and some of those were honking the horn at me and stuff like that I guess to tell me to get out of their way, and I didn’t,” Hopkins said, according to Fox News.

OK. Regardless of how you feel about President Donald Trump or his supporters, a bout of road rage is at least plausible. But then Hopkins threw in a bizarre nugget of information about his finger “kind of hurting.”

“The guy in front of me was stepping on his brakes and tried to stop dead in traffic, and I got around him and I stuck him a birdie,” he said.

“I really was about to do the peace sign to him, but this finger right here was kind of hurting, so it didn’t make it up in time. But I was like, ‘D—, dude, you’re trying to stop on the brakes in dead traffic, cause I’m in your guys’ train and what not just trying to go to work?’”

First of all, who puts up a peace sign and starts with their middle finger before raising the index finger? Maybe a young infant discovering and exploring the wondrous ways in which his digits work?

Second, Hopkins also claimed that there was “no speeding” on his part, which is a dubious claim at best given footage posted by TMZ Sports:

It’s particularly difficult to give Hopkins the benefit of the doubt when he claims he wasn’t speeding, but video appears to show him leaving other cars on the freeway in the dust.

Hopkins’ behavior is just the latest in a long line of abuse aimed toward open Trump supporters. That includes threats and being fired at, as well as general insults and harassment.

For what it’s worth, Hopkins hardly seemed bothered by that hurting finger later on.

He notched 10 catches for 103 yards and a touchdown in a 37-34 overtime win against the Seahawks the same night of the incident.

Thank goodness the Cardinals training staff was able to fix that ailing digit in time.

Hopefully Hopkins can avoid any more “that middle finger was actually supposed to be a peace sign” incidents in the near future.

Black Friday traffic in stores craters 52% during pandemic as e-commerce...