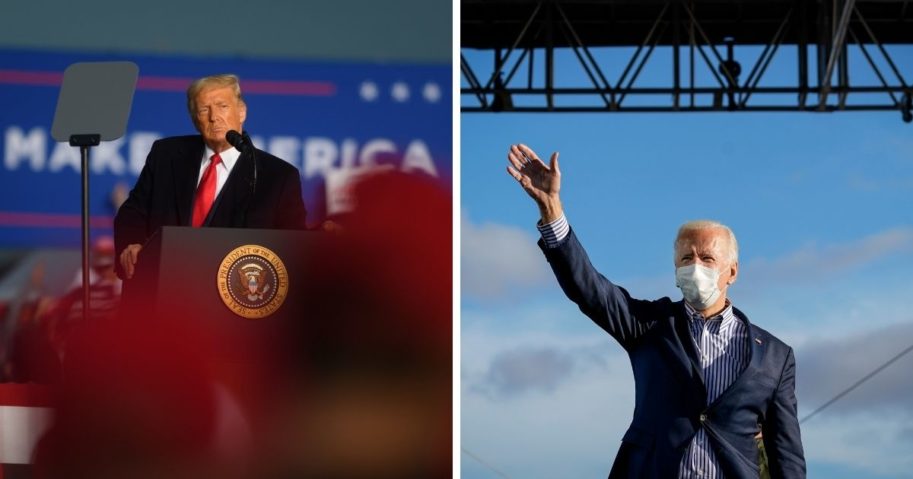 A new poll reveals the presidential race is tightening in the battleground state of Nevada.

According to Tableau-Survey Monkey 2020 election polling, Democratic nominee Joe Biden is leading Nevada with a polling average of 51 percent, with President Donald Trump close behind at 48 percent. The survey was also conducted in partnership with Axios.

“Data have been weighted for age, race, sex, education, and geography using the Census Bureau’s American Community Survey to reflect the demographic composition of the United States age 18 and over,” Survey Monkey and Tableau explained their methodology.

This reflects similar numbers to the actual results of the 2016 election when former Secretary of State Hillary Clinton won the state’s 6 electoral votes with 47.9 percent of the vote, according to the New York Times.

TRENDING: Big Tech CEO Emails All 10 Million Customers Warning a Vote for Trump Is a ‘Vote Against Democracy’

Although the state has gone blue in the past, this polling hints that Nevada may still be a very competitive state.

Republicans are continuing their voter registration effort heavily in the state.

“In Nevada, where Democrats routinely out-register Republicans in the run-up to elections, the GOP has bested Democrats for at least five months since the pandemic hit,” the Associated Press reported.

Polling from other battleground states are also reflecting a tight race.

Many Trump supporters and advocates have an understandable doubt in polling, given that Trump won the presidency in an upset victory in 2016.

While national polling did accurately predict Clinton winning the popular vote, state polling was a much different story.

Do you think Trump will win Nevada?

A large part of the inaccuracies had to do with the people being scared to say that they would vote for Trump to a survey taker over the phone.

Pollsters also did not account for the fact that Clinton was not campaigning heavily in certain Rust Belt states, where Trump held constant rallies.

Those same shy voters could potentially be casting their ballots for Trump again in 2020 and could put Trump over the edge in certain battleground states.

While most data indicates a Biden victory this election, the race is still clearly competitive and anything is possible.

'The Croods: A New Age' will be a 'non-event' at the Thanksgiving box office, analysts say

NYPD cop resigns after he is charged with sexually abusing 11-year-old...