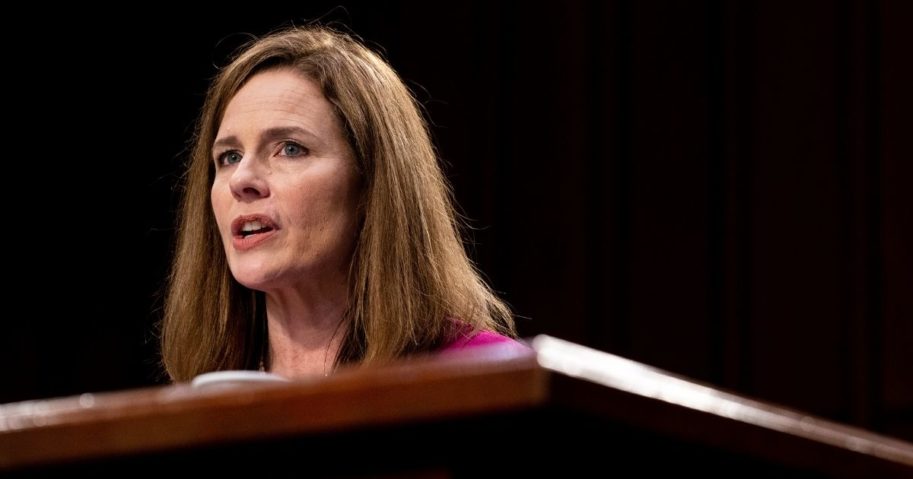 Supreme Court nominee Amy Coney Barrett said Monday that she never lets the law “define my identity or crowd out the rest of my life” as she thanked supporters for their prayers throughout her nomination process.

Following several hours of remarks made by senators, Barrett delivered pre-written remarks Monday afternoon during the first day of her confirmation hearings on Capitol Hill.

“There is a tendency in our profession to treat the practice of law as all-consuming, while losing sight of everything else,” she said.

“But that makes for a shallow and unfulfilling life. I worked hard as a lawyer and a professor; I owed that to my clients, my students and myself. But I never let the law define my identity or crowd out the rest of my life.”

Her comments come amid Democratic and media attacks on her Catholic faith, such as Democratic California Sen. Dianne Feinstein telling Barrett at her 2017 confirmation hearings, “The dogma lives loudly within you, and that’s of concern.”

Barrett said she believed courts have a “vital responsibility to enforce the rule of law” but said that they are not designed to “solve every problem” in public life.

NEW — Amy Coney Barrett’s opening statement. Notable line: “The policy decisions and value judgments of government must be made by the political branches elected by and accountable to the People. The public should not expect courts to do so, and courts should not try.” pic.twitter.com/Uvuqlgn4km

“The policy decisions and value judgments of government must be made by the political branches elected by and accountable to the people,” she said.

“The public should not expect courts to do so, and courts should not try.”

“That is the approach I have strived to follow as a judge on the 7th Circuit,” Barrett continued.

“In every case, I have carefully considered the arguments presented by the parties, discussed the issues with my colleagues on the court, and done my utmost to reach the result required by the law, whatever my own preferences might be.”

The Supreme Court nominee also thanked her many supporters for their prayers and messages of support throughout her nomination process.

“I believe in the power of prayer, and it has been uplifting to hear that so many people are praying for me,” she said.

“I look forward to answering the committee’s questions over the coming days. And if I am fortunate enough to be confirmed, I pledge to faithfully and impartially discharge my duties to the American people as an associate justice of the Supreme Court.”

Content created by The Daily Caller News Foundation is available without charge to any eligible news publisher that can provide a large audience. For licensing opportunities of their original content, please contact [email protected].

A version of this article appeared on The Daily Caller News Foundation website.